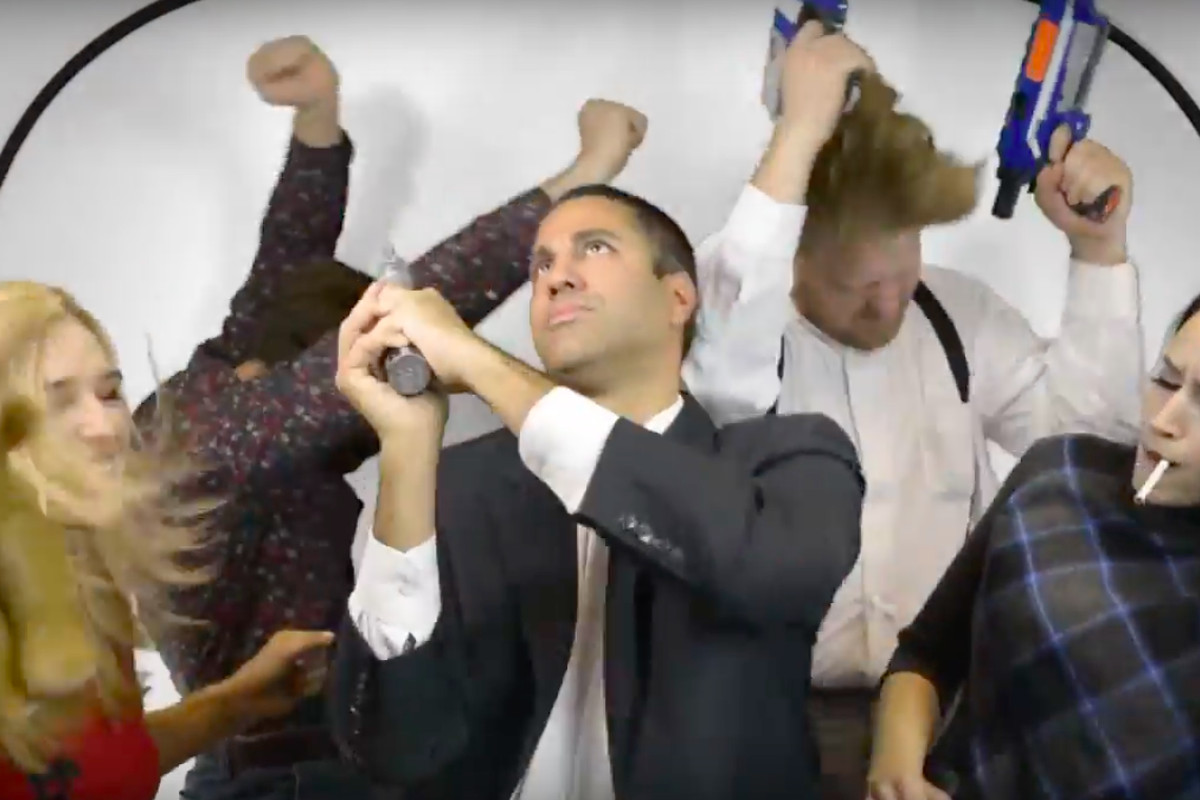 The internet’s most hated man, Ajit Pai, was taken down from YouTube for seven hours after a copyright complaint from the record label Mad Decent. Earlier this week, The Daily Callerposted a video of the FCC chairman dismissing concerns over net neutrality by while dancing around in a Santa suit to “Harlem Shake” and swinging a lightsaber. The flippant tone he took to the hot button issue of net neutrality was unpopular, and as of writing, the video currently stands at 7k likes to 169k dislikes.

Baauer, the DJ who created the track that accompanies the Harlem Shake meme, was “appalled” to be associated in any way with the repeal of net neutrality, and even tweeted that he was going to take action to “stop this loser” (presumably referring to the chairman of the Federal Communications Commission).

In a statement to the Verge on Thursday, Baauer said that he is in support of net neutrality and that his team was “currently exploring every single avenue available to get it taken down.”

According to an op-ed published by The Daily Caller, he succeeded for about seven hours.

“Google is quietly and arbitrarily using its massive power to censor the internet,” said the publisher of The Daily Caller, about the brief takedown of their Ajit Pai PSA.

“It took seven crucial hours and the full force of our news site to push Google and YouTube to reverse this political censorship,” he wrote, claiming that they were only able to prevail because of the “sizable contacts and resources” of their organization.

The Daily Caller also claimed that the takedown was wrongful, because the “FCC chairman dancing with a lightsaber to ‘The Harlem Shake,’ is an obvious parody,” and “this is as open-and-shut a case of fair use as has ever existed.”

“It’s a long standing trope of fair use cases, if you’re the one whose content is being taken down, it’s always a clear cut case,” says Tim Hwang, the director of Ethics and Governance at the AI Initiative, a joint project between MIT and Harvard. Hwang is also a lawyer and the organizer of ROFLcon, a convention on internet memes that ran from 2008 to 2012.

In general, the fact that “Harlem Shake” is a meme doesn’t give it any special status in terms of copyright law. Rather than informing any legal analysis, memes just make copyright law more muddy.

“It really highlights the inherent tension with copyright and memes,” says Meredith Rose, an attorney at Public Knowledge who specializes in policy around intellectual property law. “The underlying theory of a meme is that it’s outside a creator’s control by virtue of its own popularity and that it is by definition self-propagating. And that’s really at odds with the concept of copyright.”

Although The Daily Caller calls the video “an obvious parody,” it’s not so clear-cut. Parody is a legal concept established by Supreme Court precedent in Campbell v. Acuff-Rose, a case in which 2 Live Crew was sued for its parody of Roy Orbison’s “Pretty Woman.” But what gets to be a parody is narrower than what a lot of people may think. In Dr. Seuss Enterprises v. Penguin Books, a “a rhyming summary of highlights from the O.J. Simpson double murder trial” in the Dr. Seuss style was not a parody but instead a “satire,” which was not subject to protection under the fair use doctrine. While 2 Live Crew wrote a song similar to “Pretty Woman” to make fun of “Pretty Woman,” the satirical The Cat NOT in the Hat! was using Dr. Seuss’s copyrighted material to make fun of something unrelated, and that didn’t count as parody.

When The Daily Caller was filming Ajit Pai dancing, were they using “Harlem Shake” to make fun of “Harlem Shake”? It’s not entirely clear. Almost everyone else who’s ever joined in on the Harlem Shake meme wouldn’t be able to avail themselves of a parody defense, but on the other hand, maybe you could argue that the internet’s most hated man is poking fun at the very internet itself.

“I don’t want to say that it’s a completely frivolous argument,” says Rose. “But I think it’s a harder argument to make if you’re saying that a video of the FCC chairman doing the Harlem Shake while talking about these other issues is actually making fun of the Harlem Shake. That’s a level of meta that I don’t think Ajit Pai was going for.

When asked if Ajit Pai was being censored, Rose laughed very long and hard.

Public Knowledge vocally opposed the rollback of net neutrality rules spearheaded by Ajit Pai. But at least one other advocacy group that opposed net neutrality sides with Pai on this one.

“I was doing my level best to avoid seeing that video, but now that I have: the video is indeed a classic instance of fair use and not a proper subject of a DMCA takedown whatever the motivation,” says Corynne McSherry, the legal director of the Electronic Frontier Foundation, which also vehemently opposed Pai’s policy proposals.

“That said, to send a takedown notice for purely political reasons, assuming that is what Baauer did, is even more improper — and sadly all too common. EFF may share Baauer’s concerns about net neutrality, but abusing the DMCA is not the right way to fight for it.”

Whatever the answer is, everyone agrees that the problems that The Daily Caller ran into are well-known and experienced frequently by many others. “It’s framed in such a conspiratorial way, but in many ways it’s a textbook case around how do we deal with memes online,” says Hwang.

“The internet is a very vibrant place, and I think a lot of the memeing and a lot of the nontraditional creativity that goes on is a good thing,” says Rose. “We don’t want to force that into the shadows in any way, but at the same time, the law is what it is, and until we rewrite it and restructure it to take account of things like memes and collaborative creativity and derivative creativity, we’re going to have these situations, which are either a bug or a feature depending on who you ask.”

It’s almost like this policy has had unintended consequences and maybe the best thing would be for the law to step in and buffer consumers from the whims of unfeeling corporations? Anyways, congratulations on getting your video reinstated, Ajit.

« Chrome will finally let you mute autoplaying videos
Congress could bring net neutrality back, but it won’t be easy »